Caffeine’s Effects on Pregnancy and How to Handle the Effects

Caffeine during pregnancy is something all pregnant moms-to-be need to know about. When you’ve been up to go to the bathroom five times at night, a hot cup of joe in the morning sounds like just the thing. But can you drink coffee while pregnant? How much is too much? We’ve got all the coffee pregnancy facts you need below.

Why Is Coffee and Pregnancy an Issue?

Coffee contains caffeine, a powerful stimulant. That’s why we love it because it makes us feel like we have more energy and blocks the chemicals in our brain that makes us feel sleepy. During pregnancy, the body is slower at processing caffeine, which means it hangs around for longer. This can cause problems for both mom and baby.

Caffeine is a diuretic, which means it makes you pee more than usual. This is a contributing factor towards feeling dehydrated, which is bad news during pregnancy when you need more water than ever. Dehydration also leads to dry and dull skin, irritability, and can affect the immune system.

Although the stimulating effect of caffeine is why we love our coffee, this is also bad news during pregnancy. Caffeine can raise blood pressure. Very high blood pressure can lead to conditions like pre-eclampsia. Caffeine also makes the heart rate, which puts press stress on you and your unborn baby.

So, Can I Drink Coffee While Pregnant?

Coffee during pregnancy can cause problems, but only over certain amounts. A range of studies come to differing conclusions. Some say less than 150mg caffeine a day is fine; others say 200mg or less. When working out how much caffeine your taking in every day, remember that caffeine is in more than just coffee- see our helpful list below.

How Much Caffeine When Pregnant Is Safe?

Understanding how much caffeine a pregnant woman can have is about looking at the most recent studies we have on the subject. A British study concluded that over 200mg of coffee could seriously increase the risk of fetal growth restriction. The World Health Organization recommends that women who take in more than 300mg a day should lower this during pregnancy, and it’s a good idea to do this if trying for a baby too.

Enjoying a coffee while pregnant is still possible. The problems with pregnancy and caffeine tend to occur when the regular daily intake is consistently high. So, how much caffeine can a pregnant woman have? The best recommendation is no more than 200mg daily, and the less, the better. Remember that caffeine comes from more than just coffee and can also be found in:

Here are some approximate caffeine amounts for favorite drinks, courtesy of the Mayo Clinic:

Espresso: up to 47mg

Can pregnant women drink coffee? Sure, but from the caffeine amounts shown above, only around one cup a day. We know that’s tough, so here are some alternatives to help you get your hot drink fix:

Don’t fall into the trap of thinking all herbal teas are great. For example, anything with raspberry in it should be avoided as a raspberry leaf can cause uterine contractions. It’s so powerful that your doctor may recommend this at the very end of your pregnancy to help things along. Aloe vera can also have this effect, which is why it’s crucial to talk to a doctor before taking any herbal remedies or teas while pregnant.

Is It Safe to Quit Caffeine? 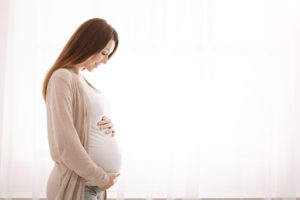 The best option for both mom and baby is to cut out as much caffeine as possible. But is it safe to go cold turkey? Potential side effects of quitting caffeine include:

As a pregnant mom-to-be, you might have some of these symptoms anyway- particularly the tiredness! However, to avoid these, simply cut down your caffeine intake before quitting. Go from a large coffee to a small, and then if you want to quit completely, the effects will be much less. These effects all pass after a few days.

Drinking coffee when pregnant is okay in moderation, although experts can’t agree how much is too much. If you’re worried, switch to decaf or a low caffeine option. Whatever you choose to do, make sure you’re drinking plenty of water and eating healthily.

Please understand that in some cases we may receive commissions when you click our links and make purchases. However, this does not impact our reviews and comparisons. We try our best to keep things fair and balanced, in order to help you make the best choice for you.